Our science club focus for this week was electricity and circuit making, with a sprinkle of chocolate. The children made circuits and experimented with different wires and varying number of battery and bulb combinations. As if this wasn't exciting enough, the children then conducted an experiment to explore their sense of smell using melted chocolate.

Some of our Key Stage 2 children enjoyed taking part in an after school science club this week. The focus of the first session was the human body. The children explored the roles of joints, tendons, muscles and bones. They also did a pulse test, before and after exercise. The main activity was making their very own replica arm, to help them understand how joints work. It was a fun and informative session.

Four of our Year 5 children attended a STEM event at Fleetwood High School today. Our task was to build a bridge that was both sturdy enough to hold a 1KG truck and tall enough to allow a boat to pass underneath. The wood had to be cut to size by the children, using a hack saw, and the holes drilled independently. The children worked tremendously hard to build a bridge that more than met all the requirements. Well done team Blue Bridge!

Peregrine class - What is evolution?

Our Science focus for this half term is evolution. We started our learning by thinking about inherited characteristics and the variations that can occur. This led on nicely to a group activity looking at how humans, plants and animals can adapt to their surroundings.

Today has been a particularly special as, across the school, we have been celebrating Science. Our day began with a spectacular Science assembly, during which the children were entertained with a variety of experiments and awesome scientific facts. Each class then conducted their own Science based activities. It has been an incredible and exciting learning experience for the children, involving everything from constructing catapults, making ice cream, propelling rockets, producing slime, creating volcanic eruptions, and making lava lamps -  to name just a few of the wonderful activities. The children have been enthralled and it's been a truly memorable day.

Steve Rossington, a science lecturer from Salford University, came in school to launch our Science day with a literally BANG! He demonstrated to the children the effects that certain gases have on different items, for example he froze apple, banana and flowers all using carb ice (dry ice). He then visited each class for short workshop, when visiting Year 6 he made ice cream, which the children got to eat. He used cream, sugar, milk and carb ice and mixed it altogether which almost instantly it transformed into crystals of ice cream.

Year 6 had the opportunity to visit Mrs Hoy, head of Science, at Cardinal Allen for a chemistry lesson. The lesson focused on testing different types of metals and their reactions with hydrochloric acid.

Back in the classroom for the afternoon, Year 6 used their knowledge of the circulatory system and made their own blood - with sweets. We recapped on the components of blood, the function of each part, then made our own representation using honey for the plasma, Haribo strawberries for the red blood cells, white chocolate buttons for the white blood cells and rainbow drops for the platelets.

Michelangelo class - learning about how the digestive system works

This afternoon we did an experiment to examine the digestion process in more detail. We used various substitutes - such as orange juice, a plastic bag and so on - to replicate the elements of the system and see how the food is broken down and processed in detail. It was an engaging, fun and informative lesson as you can see from the pictures below.

Banksy class have been learning about light and dark as it is becoming darker earlier, the closer we get to winter! As the children were interested in the puppets in the reading area, we learned about shadows by creating shadow puppet theatres and by blocking the light from the projector so a shadow formed on our interactive whiteboard.

This week -13th November- Ringgold Class performed a series of experiments using different substances to see if they would dissolve in water. We used the following: salt, sand, coffee, gravy, chalk, flour and rice. As a result we were able to identify those that were soluble and documented our results.

Ringgold class performed a science experiment to see which material would make the flood lights burn brighter. The children made circuits using different materials including; a coin, a metal spoon, tin foil and a nail. Which do you think would be the brightest?..........................

Hokusai searching for mini-beast in their habitats in the school garden. Then looking at and describing different animals and habitats around the world using adjectives.

The topic in Michelangelo class this half term is 'How do you use electricity?

We're going to pick up the pieces and build a lego house...

Michelangelo class enjoyed a Science session with a difference today. The children took part in a lego workshop which incorporated the electricity topic we are currently studying. The session began with the children building a structure of their choice which they then added to with windows, doors, trees etc. The final stage was to align all the creations to form a lego city, complete with roads. Electrical components were then added to the buildings to make them light up. It was amazing and I'm sure it was a lesson the children will never forget!

Our focus on electricity has moved onto electrical circuits. We used practical equipment  to make circuits and experimented with different battery sizes.

This week Year 4 have been experimenting with various materials to test how effectively they absorb sound. The children conducted the experiment independently using an i-pad for sound and a selection of materials ranging from cloth to bubble wrap. The children thought carefully about how to make it a fair test in terms of what variables could be changed and what must stay the same.

Curie class investigating which surface needed the most force to push the car.

Museum of Science and Industry

Lovelace Class visited the Museum in Manchester to bring their recent learning to life.  They joined in the various exhibitions and activities, with particular reference to Forces and Robots.  They were also lucky enough to see the new exhibit about Space Travel and the artefacts donated by Tim Peake.

Lovelace children have been learning about different forces.  They designed parachutes and boats to investigate the effects of air and water resistance on objects.

In Reception we have been growing cress.
We have each kept a cress diary.

Y1 planted bean seeds.
We will observe our plants over the half term.
Y1 looking for wild plants around school.
We made tally charts of our findings.

How does our digestive system work?

Our focus for this half term is the digestive system and how it works. We began our topic by thinking about our different teeth and how they help the digestion process. This included the importance of looking after our teeth and possible food choices to support this. As you can see, the disclosing tablets were a real hit with the children.

We conducted an experiment to see what functions our individual teeth play in the role of digestion. This involved eating an apple and stopping at various stages to think about which teeth we were using at each stage.

Einstein's topic for this term is electricity. Over the coming weeks the children will consider how electricity is used and create their own circuits with varying components. We will link electricity to our English and Design Technology lessons too, by using electricity themed comprehensions and designing an electrical object of our own.

We are Bright Sparks!

In Einstein class this half term we have completed so many science activities!  We are now amazing at making circuits, talking about circuits, adding buzzers and motors into our circuits and even building Lego houses that include circuits!  We have answered lots of scientific 'SATs style questions' that link to our learning, we have completed many practical experiments, we have evaluated our learning and even created an assessment poster of all the wonderful things we now know!  We were also lucky enough to have a visit from 'Creative Builders Workshop' whereby we took part in a Lego workshop; we built Lego houses that included circuits that lit up.  We had so much fun and worked amazingly hard as a team.  We all shared the Lego, supported each other and praised each other for our wonderful work!  We hope you enjoy looking through our work from Autumn 1.

Today we took part in a Lego workshop.  We built our own Lego city which included a working circuit.  We worked so well as part of a team and we even got to make a car move.  We put into practice all the wonderful things we have learnt in science this half term.  We really enjoyed it!

This half term Year 6 have been doing research about evolution.  Here are a couple of pictures of us at work!

We visited the community garden at the Memorial Park and planted our own sweetcorn! We can't wait to go back and harvest it in the Autumn. 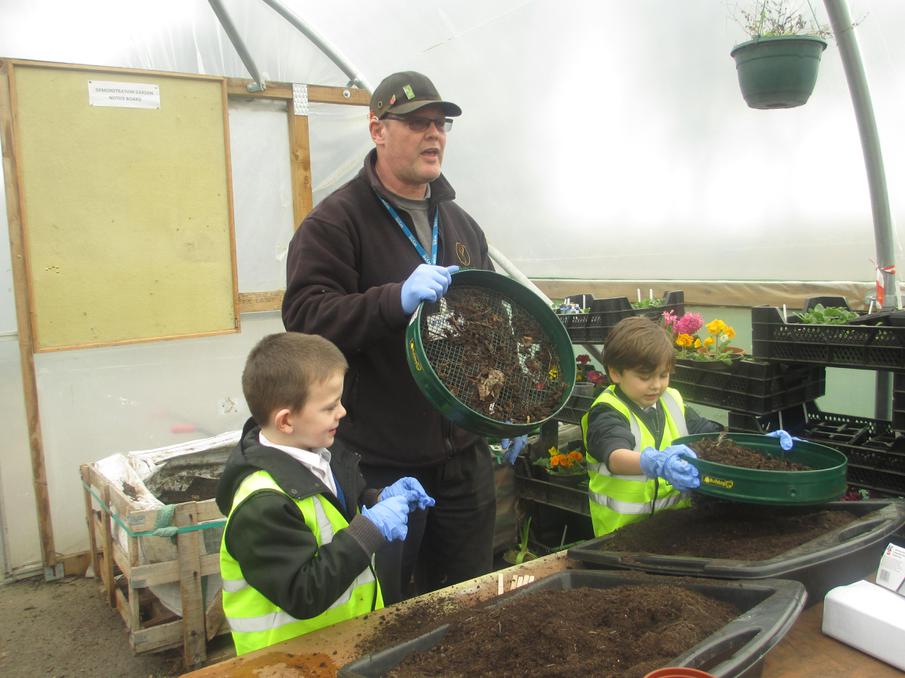