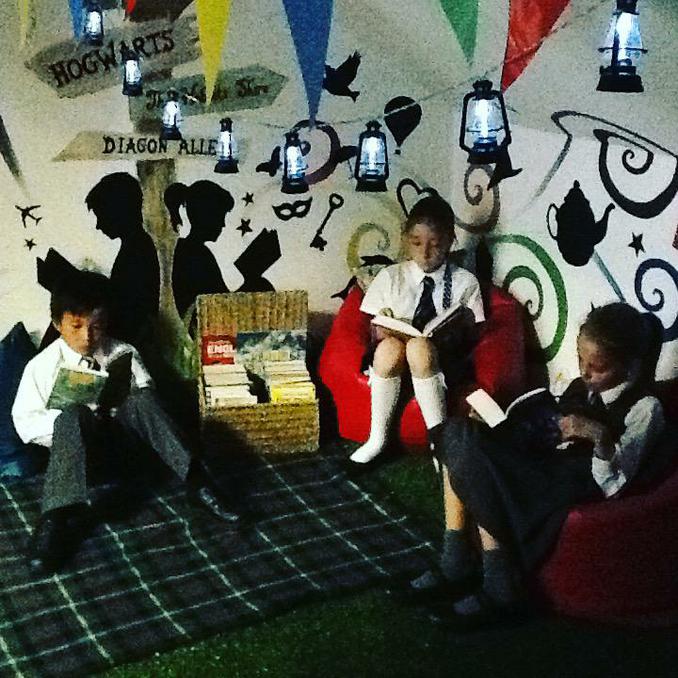 Do you have any ideas for this page? Why not let me know!
Have you seen the Kids' Zone? Play games and visit some cool websites. You can vote for your favourites.

A picture paints a thousand words - check out our learning!

Our busy week ended with our end of year trip to the Pleasure Beach. Although slightly wet - the children were on their best behaviour and continued to enjoy themselves in the rain. Big thanks to Mrs Bradford, Mrs Halloran, Mr Parkinson and Mr England who came along for the day.

Our busy week continued with a morning on Fleetwood Beach, luckily the sun was shining and Mrs Davies led us in a variety of activities: sand art, sandcastle building, shelter making and a creature hunt.

On Tuesday 12th July, we did our KS2 summer production called 'Reach for the Sky' at the Marine Hall. Here are some pictures taken during our rehearsal in the afternoon before our show in the evening in front of the families and friends of St. Mary's. We hope everyone enjoyed. The actors and singers did themselves, families and us proud!

On Thursday 7th July, Fibonacci Class took part in a workshop led by Marten operatic society, who came to share their show of HMS Pinafore, the children got the opportunity to learn the story, dress up and do some acting too. Great way to get us in the mood for our production next Tuesday!

On Wednesday the children enjoyed our school sports day down at St. Wulstan's field. Lots of parents came to join us as the children completed activities such as: 60m sprint, hockey dribble, obstacle course, javelin and hurdles. The children had a great time and the overall winning house will be announced at Prize day afternoon on Monday 18th July.

As a real life starter to learning about breakfast in France, Fibonacci children shared croissants, brioches and pain au chocolats with orange juice. After this surprise treat they went on to learn about the key vocabulary, pronunciation and gender of breakfast item words.  They worked independently and in groups on speaking and listening exercises.

Celebrating the end of SATs

After a different type of week with SATs tests, Fibonacci Class have raised up to the challenge. Firstly, our Year 6's stepped up to the New Curriculum and tackled the tests to the best of their ability and secondly our Year 5's in Fibonacci Class, worked well in groups to complete their own Maths project, showing patience and flexibility as we concentrated on Year 6's doing their SATs. We had a lovely afternoon on the beach and on the beach park as a treat together as a class.

Each morning during SATs week, the Year 6 children were welcome to come into school early to have their breakfast (toast, croissants, fruit and juice). This gave us the chance to ensure we had our brains ready and to calm any nerves.

The Rotary Club held a young writer competition in the Spring Term, the theme was Our World and the children could complete any type of writing but on that theme. And fantastic news is to be shared...Abigail Egan, won the junior round out of all the children in Fleetwood who entered the competition, as well as the overall winner for the whole competition, including intermediate level and the seniors. She received a trophy for this to be kept in school. Abigail was presented with a certificate and a £25 Amazon voucher too. Read Abigail's piece of writing that won her this great prize and recognition for being such talented writer.

Stations of the Cross

During our last week of the Spring Term, also the last week in Lent, we held our own version of Stations of the Cross - where we remembered the sacrifice of Jesus' life. Each class contributed two stations to the story of the events of Good Friday, as well as Church and our school office each contributing too. Each class took it in turns, Fibonacci Class went down to the hall together for reflection and then had their own for personal reflection at their chosen stations. Some of our parents, joined us throughout the day and at the end of the day, to see the work the children had created to retell the story of Good Friday.

Stations of the Cross Service at Church

Seven of our fantastic pupils (Alexander, Oliver, Evie, Lamiha, Abigail, Holly and McKenzie) gave up their lunchtimes, every Thursday during Lent to go to church to be part of the parish's service for Station of the Cross, joining the parishioners for the service and a Lenten lunch. The children were complimented on their reading, behaviour and manners. The parishioners then joined us for our service in the school hall using the stations each class made.

Today we joined Wyre Rangers who work for the Council to promote keeping our beaches clean and work together along with 500 other schools to complete a litter picking activity on the beach. This will be a gift to Queen as she turns 90 this year. The children worked in pairs and cleared a section of Fleetwood Beach of any rubbish it had on it. The children did an excellent job, even in the wind!

We had a great time with our visitors in class this week: grandparents, aunts and mums joined us in our world book day parent session, where we completed a quiz in teams about characters and authors, as well as having adults share their favourite book from when they were a child.

Today (Friday 26th February), we celebrated Mellissa Ranasinghe and Rosie-Lea Cullen receiving their Pen Licence after hard work and persistent asking! Rosie even had pupils and staff sign a petition to agree with her that she was ready, after she showed them her English book! Here are all the children in our class so far, who have earned their pen licence - Well done!

Are you a healthy Hero? Making our own blood!

Where in the world?

During recent French lessons, in addition to learning a new language, upper Key Stage 2 have also been learning where in the world French is spoken.  This week Fibonacci took part in a speed challenge matching national flags to the French speaking country they belong to.  They had great fun and hopefully learnt lots too.

The Boy in the Striped Pyjamas

During the last half term, we have been reading 'The Boy in the Striped Pyjamas', completing predictions, class reading, writing diary entries and letters in role, as well as comparing the characters. Abigail did a brilliant at getting into role as the character of Mother, answering questions about her opinions and feeling of living in Auschwitz during the Second World War. We read the entire book and ended our work on this unit by watching the film.

Preparing for the coming of Jesus

During the Season of Advent, Fibonacci Class took part in a posada box activity, along with other two Key Stage Two Classes. A posada box is a Mexican custom where the Nativity figurines are passed from home to home within a community to remember the journey that Mary and Joseph made to get to Bethlehem where Jesus was born. Each receiving family welcomes the giving family into their home, offers them some hospitality and places the figurines into their Nativity scene for the night. The following evening, the figurines are passed on to another family in the village.

We did this within our own classroom, with the figurines being passed on from family to family, taking a picture of welcoming Mary and Joseph in their home with sharing an advent prayer and lighting a candle.

Our Classroom in Autumn II

During the last half term, heading towards Christmas, Fibonacci Class have been developing their understanding on lots of different areas in Maths, but particularly concentrating on fractions and their relationship with decimals and percentages. In English, we have read the story 'Street Child' by Berlie Doherty. As a class we have thoroughly enjoyed sharing the book together and completed lots of different writing activities related to the story and its characters. In R.E, we've continued our learning on the theme of Justice - learning about Dorothy Day, John the Baptist and Martin Luther King. As we have grown close to Christmas, we also looked at the story of the an act of charity from a young boy during winter, giving up a new coat for a homeless boy and learnt about the Christmas truce between the British and German soldiers on Christmas Day in 1914. Already looking forward to Spring Term 2016 - watch this space.....

Celebrating the end of a hardworking term with our Christmas Party afternoon, with lots of food, music, games, secret santa and even a visit from Father Christmas and his Elf Bailee. A really enjoyable afternoon - Merry Christmas to everyone

The children performed superbly in the Key Stage Two Carol Service, as we shared the Christmas story through our acting and singing. It was lovely to see our Church so full of family and friends of St. Mary's supporting our school and their children. Merry Christmas to all our families, we hope you enjoyed it as much as we did!

We've been to the Panto! This year's pantomime at The Grand in Blackpool was Snow White. Fibonacci, along with the rest of the school - 170 people in total, travelled to Blackpool and enjoyed the Christmas Panto. Lots of laughter, sweets and joining in.

We came 3rd! Well done St. Mary's children. On Friday 4th December, 18 children went to Cardinal Allen to take part in an Athletics Competition alongside other Fleetwood schools. The children were brilliant with displaying their skills, great behaviour and looked excellent in their new athletic uniforms!

In Fibonacci Class since half term, we have been learning about fractions. We have made our own Fraction Jenga game, where we can apply our understanding of finding fractions of amounts, equivalent fractions, as well as simplifying fractions. Our maths working wall is currently about fractions too, sharing our methods and our fabulous work!
Top
Cookie information
Cookie Notice